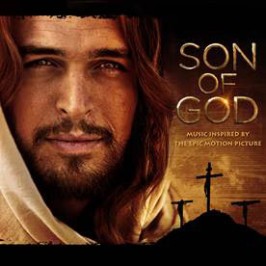 I’ve watched the majority of Jesus flicks, including The Passion of the Christ (2004, stunning film), The Last Temptation of Christ (1988, disturbing film), and Jesus of Nazareth (1977, made for TV movie). Initially, I wasn’t all that excited about the current film, but my hopes were elevated in days prior to it’s release. So, I caught a $6.50 discount showing on opening day. This is my review.

If you want a fast edit, here it is. The movie was okay, not bad, but certainly not a great film. If you liked the Bible mini-series that was televised in the Spring of 2013, then you’ll enjoy this. If you are a believer, you’ll likely enjoy some or all of it, and perhaps find yourself emotionally moved. For non-believers there is an inescapable cheese factor that can be off putting. Jesus looks like a rock star from the 70’s or 80’s with male model looks, but bad hair. I could also envision a few sarcastic people laughing or rolling their eyes at some points. I thought it was worth $6.50. However, I probably wouldn’t see it again in the theater unless I brought a guest whom I believed would benefit. I might show some clips at our church one day.

Here is what I appreciated. It is a faith filled film. The major contours of Jesus’ life are followed. He is portrayed as the Son of God, crucified, resurrected and returning. These are the most important issues. That is why I can recommend the movie.

There were a number of factual errors that irritated me. Like the Bible mini-series that birthed it, this film plays fast and loose with the facts. I’m not speaking about debatable issues, but historical details found in the Bible text. For the most part this movie is based on John’s gospel. It includes Nicodemus, the woman caught in adultery, and the resurrection of Lazarus. All of these characters and their stories are found exclusively in the Gospel of John. However, when relating stories found in that gospel, there is a consistent disregard of the facts: events are reordered, truncated and sometimes told inaccurately. Several examples follow (spoiler alert).

In this movie’s version of raising Lazarus, Jesus enters the tomb, breathes on the dead man and speaks part of John 11:25-26, “I am the resurrection and the life.” The Gospel of John records that Jesus actually stood outside the tomb and called, “Lazarus, come out!” at which point the dead man exited still bound in grave clothes. The Lord had assured Lazarus’s older sister Martha “I am the resurrection and the life” prior to his arrival at the tomb. Okay, I can already anticipate that some of you are thinking I’m being overly picky, but if you don’t think that sounds important, hang on, there’s more.

In the movie, when Jesus first appears to the disciples, he is glowing white. Thomas won’t look at him. In fact, the doubting disciple looks down and says something like, “I don’t believe it.” Jesus goes around and touches each disciple on the head, when he touches Thomas, the doubter believes. This isn’t even close to what John’s Gospel records. In fact, it seemed silly to me that Thomas looked down and said he didn’t believe when there is a brilliant white figure standing about eight feet away lighting up the room. In the Gospel of John, Thomas was absent on the first Sunday evening when Jesus appeared. He’s often called Doubting Thomas because he said he would need to see and put his finger in the nail prints and put his hand into Jesus’ spear pierced side before he would believe. When Jesus appeared the next Sunday Thomas was present and made the greatest confession of Christ found in the Bible. Thomas called Jesus “My Lord and my God!”

The movie is called Son of God. What’s wrong with portraying the event as it happened? I’ve made a feature length film, and a number of shorts. I understand that the filmmakers wanted to truncate Thomas’s two appearances and just communicate that his doubt was alleviated, but what they did doesn’t work, doesn’t seem authentic, isn’t accurate, and misses a perfect opportunity to reinforce the main idea: Jesus is the Son of God.

Why am I so hung up on this issue of details? The filmmakers aren’t dealing with a novel or a comic book here. They’re seeking to portray God’s Word. This is history, holy history. It is the most important life ever lived, the most important event that ever occurred. We have accurate, inspired records of Jesus’ life. What really happened is really important. Let me give two final examples.

First, there was an error that is also found in the film The Passion of the Christ. While the soldiers are crucifying Jesus, they tear his tunic in half. The historical reality is, the soldiers were careful not to tear Jesus’ tunic because it was woven in one piece and therefore valuable. They gambled for it instead. Why is this detail important? It fulfilled a Messianic prophecy found in the Old Testament, which John’s gospel carefully points out (John 19:24). The movie does show the soldiers shooting dice at the foot of the cross, but we are left to wonder why.

Secondly, the holes in Jesus’ hands after the resurrection are so large they seem cartoonish. They are the size of silver dollars. Other than the fact that this appears unrealistic, it is also clear that if the nails had made large holes like this it would have caused broken bones in each of Jesus’ hands. The Gospel of John points out another important Messianic prophecy that was fulfilled at the cross. The Roman soldiers did not break Jesus’ legs to expedite his death as they did with the other two crucified criminals. Instead they pierced his side with a spear to verify that he was already dead. John’s gospel tells us this fulfilled the prophecy that stated, ”Not a bone of his will be broken” (19:36). Jesus was crucified on the day Passover lambs were slaughtered, and the Jews were forbidden from breaking any bones in the lamb. Jesus is our Passover lamb! Many times details really do matter. Facts always do.

So, by all means, go see the movie Son of God. However, get the facts straight by reading your Bible. I am concerned that many people will not. If you are a believer, then use this film to tell people about Jesus. Invite them to a church that teaches the Bible and proclaims the Gospel of the crucified, risen, returning Savior of the world.